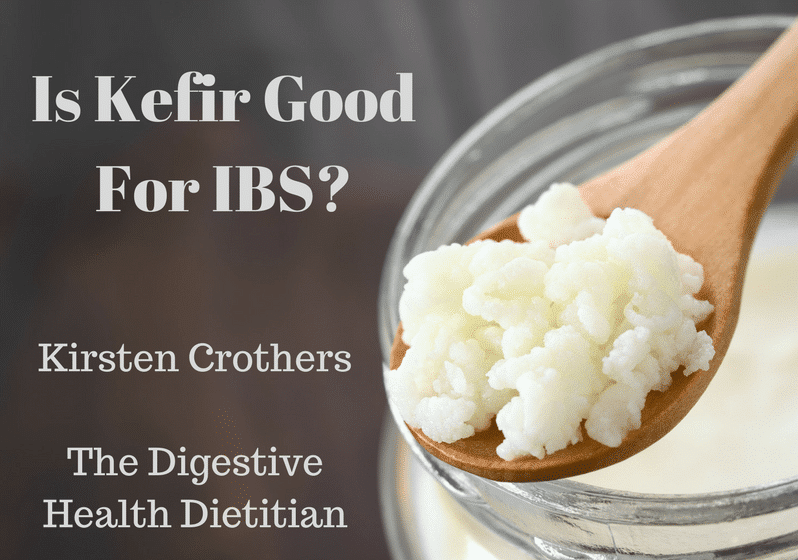 Kefir is a fermented milk drink which originates from the Caucasus Mountains near the Black Sea and has been used for hundreds of years (2).

Kefir was originally used as a way of preserving fresh milk, but due to its very high numbers of good bacteria, Kefir is now a known probiotic. It is claimed to prevent and manage many digestive health problems such as inflammatory bowel disease, diarrhoea and irritable bowel syndrome.

Kefir can be bought in shops ready made and flavoured or you can make it at home by adding Kefir grains to milk. There are also several recipes available which now use Kefir in baked products, although the baking process is likely to kill any good bacteria off.

What Does Science Say?

Use of probiotics in general for IBS has been shown to have some, limited benefit (1). What seems to be emerging is that each strain of bacteria is very specific to helping a certain symptom. So simply trialling one type of probiotic randomly may not be of any benefit.

One of the problems with probiotics is that the good bacteria they contain needs to survive in your gut long enough to have a beneficial effect. But, your gut is filled with acids, enzymes and bile which are designed to break things down. Unfortunately, this often means that the amounts of bacteria which actually survive in your gut are in too small numbers to have a beneficial affect (3).

When looking at Kefir specifically, there seems to be no scientific research looking at its use in IBS. There is, however, some suggestion that Kefir could improve gut bacteria which may in tern help with digestive health in general (2 , 4).

There has also been some suggestion that Kefir may help those with lactose intolerance. In One small study, kefir containing 20g of lactose was given to participants with lactose intolerance. It appeared that despite having had the same amount of lactose as in the milk, the participants had less of a reaction (6). However, this is was a small study and there is a chance that placebo may have played a role.

The other problem with a lot of the research we have right now is that it is often carried out in animals or in vitro, rather than in human beings (4). Although gut bacteria can play a role in IBS, there are also many other factors which need to be accounted for, so any results seen in these studies is unlikely to have the exact same affect in a human.

Is Kefir Better Than Other Probiotics?

The benefit of Kefir is that it contains much higher doses of probiotics than the usual store bought products, in theory this means that more bacteria will survive having a bigger impact on gut health. Not only this, but Kefir contains a huge variety of bacteria – around 30 different strains, thus potentially limiting the issue of not getting the correct bacteria for your symptoms.

Not only is Kefir good from a bacterial point of view, a glass would also contribute to your daily calcium, protein and vitamin B12 needs.

When made from scratch, it is also a lot cheaper than other products as Kefir grains can be used over and over.

Where Can I Buy Kefir?

Kefir can be purchased in most large supermarkets, but it is better to make your own, as when made traditionally it contains higher amounts of yeast which is good for your gut (3). Kefir grains can be purchased online or in health food shops.

Despite having no solid evidence behind it yet, Kefir should in theory be useful to those with digestive health problems, where gut bacteria has a role – IBS being one of them. Kefir has no reported side effects and so any potential benefit outweighs its risks.

The sensible approach to see if Kefir is right for you would be to try it for 4 weeks to see if you notice any benefit. If you experience no symptom improvements, then you haven’t lost anything (5).

Just be wary not to try Kefir when changing your diet in other ways as if your symptoms change then you will be unable to pin-point the cause.

Previous Post: « Traveling for Work? What to Eat at the Airport When You Have PCOS
Next Post: Is Gluten Bad For You? »